Beaches, fiestas, walks and events in this enchanting corner of the north of Mallorca

Find inspiration and new ideas on what to see and do in Pollensa old town, where to visit, what to look out for and what you can absolutely not miss, on holiday in Pollensa. Get the low-down on exciting expeditions, cultural exhibitions and inside tips to how make the most out of your trip to the island.

We not only live in Pollensa, but we have visited and sampled every one of our suggestions on what to see and do in Pollensa, so you can be certain that this is as insider as you get.

Sights and Views - Walking in Town and in the Hills

One of Pollensa's most distinct and auspicious qualities is its startling natural beauty. Beyond the holiday packages and sun seeking hordes there is the underlying charm of its landscape and architecture, and the drama of mountains and sea.

From age old festivals to modern art, trendy cafes and cobbled streets, the roll call of beautiful and wonderful buildings and sights, and the wealth of what to see and do in Pollensa is longer than warrants a relatively small Mallorcan village up on the north coast of the island.

One of the first things to see and do in Pollensa is to do some sightseeing, get your bearings and soak up the unique Pollensa feel. Take a magical history tour down its ancient cobbled streets, walk the 365 steps up to the Calvary Chapel and visit the Roman Bridge on the edge of town. The cloisters below the main plaza host the summer's Classical Music Festival and a myriad of performances, plays and art exhibitions throughout the year.

Walking up the Puig de Maria Mountain in Pollensa

If you enjoy walking this is one thing walk in Pollensa you may like to try. The Puig Maria is a perfectly domed mount on the edge of town with a small monastery on the top. Like a Mallorcan version of Hiroshige's Mount Fuji views, the Puig Maria is omnipresent in Pollensa, aside from days of dense fog, you can always see the puig and it nestles the town from the south. A 45 minute walk which a young child can undertake easily, will take you to the peak where a small cafe serves breakfast, lunch and dinner as well as drinks throughout the day, a fresh water well and basic accommodation in the old monk cells for the night.

Beaches in the North of Mallorca 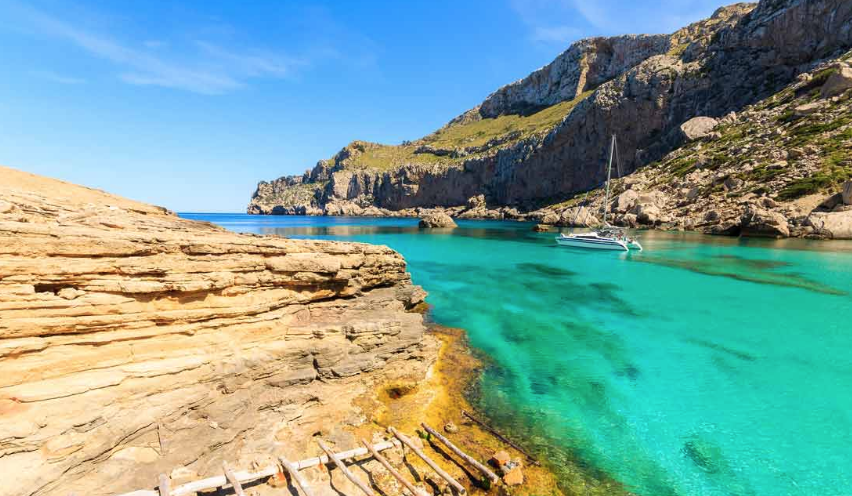 As much what to see as what to do, beaches near Pollensa come in two varieties. First is the long golden sandy beach of the Bay of Pollensa, which stretches for miles down the north eastern coastline, past the Alcudia headland, down as far as the Playa de Muro and the stunning beach of Formentor, beyond the lighthouse, on Mallorca's northernmost point. With shallow waters and well provided in terms of facilities, beach bars etc. these are the more family-friendly beaches, picture perfect and easy to reach.

Secondly, there are the tiny rocky coves and pebbled beaches of Cala San Vicente, on the northern coast, and the hidden wonders of Cala Figuera and Cala Murta on the Formentor Peninsula. For the more able bodied and adventurous, these beaches rank highly on any serious beach lovers what to see and do in Pollensa list. Etched into the sheer rock face of the Tramuntana Mountains, these are the best kept secrets in the area, wonderful places to visit, tricky to access and hence, still wild and beautiful.

For our personal choice of the best beaches in the north of Mallorca, follow the link to our blog. Most are only a short drive from Pollensa old town, though some of the more remote beaches require walking to.

Fiestas and Events in Pollensa

From weird and wonderful to downright wacky, our what to see and do in Pollensa guide cannot but mention Pollensa's full calendar of fiestas, festivals and fairs throughout the year. Often an odd mix of religious and pagan, the traditional festivities mark the seasons and the agricultural harvests, commemorate the lives of saints and historical events and sometimes are just an excuse to have a party.

If you're in town at the start of August, what to see and do in Pollensa may have to include La Patrona. In summer, several villages celebrate the mock battle of the Moors and Christians, most famous of which is Pollensa's La Patrona, or Patron Saint Maria dels Angels, on the 2nd of August. Pollensa's most important fiesta, it commemorates local hero Joan Mas's victory over the pirate Dragut and is the final event of a week-long celebration with art exhibitions, music concerts, children's parties, religious processions, theatre, outdoor cinema and traditional festivities.

As the liqueur flows freely hundreds of men clad in multicoloured coloured Moorish robes brandish swords at the Christians in white, armed with farm tools, the battle is not a fiesta to get stuck in with young children but striking and raucous nevertheless. At midnight, following the battle and victory blessing, fireworks light up the town in a pyrotechnic show to mark the end of the fiestas.

Note that every village and town on the island will host their own particular version of each of these fiestas, which will vary in subtle ways.

The Pollensa Music festivalis is held in the evocative Cloisters of Santo Domingo in the centre of Pollensa throughout the month of August.

The festival was founded in 1962 by English violinist Philip Newman to showcase classical, contemporary and world music as well as literature and film.

SANT ANTONI - The patron saint of animals and Pollensa's must see winter fiesta takes place in town every year on the 18th of January.

The party kicks off the evening before on the eve of Sant Antoni with a bonfire competition whereby different associations and groups show their political, comical and artistic creations and then at the stroke of the clock, all the towns' fires are lit, warming the cold January night. BBQs are lit amongst the embers and the town celebrates by eating together.

The blessing of Sant Antoni. On the morning of Sant Antoni, at 10 am, the streets of Pollensa are filled with horses, pigs, herds of sheep, and a whole collection of pets and varied farm animals, as well as dogs, cats, and the odd goat. The animal procession circles the town and respectfully files past the church in the main square to receive their blessing from Pollensa's priest.

The fiesta of Sant Antoni. And then comes the best part, the big Sant Antoni fiesta when the entire town walks up to Ternelles, into the private land of the March family. A day of walking, eating and drinking in one of Pollensa's most beautiful valleys, in order to take an enormous pine tree into the very centre of Pollensa. It will eventually be transformed into the sticks and swords of the Moros i Cristians. The tree will have been chopped, de-branched and waxed for the journey.

It is a cumbersome and drunken procession which manages somehow to transport a 21m long pine tree through the impossibly narrow streets of Pollensa all the way to the Plaça Vella, the tiny old square at the side of the church, for the final competition; first to the top of the pine pole wins!